I Thought I Could Handle it (Fentanyl Overdose Survivor Story)

Deaths linked to synthetic opioids like Fentanyl have nearly doubled over the past few years. What is even scarier is the massive production of counterfeit drugs being sold that contain fentanyl. Fentanyl is cheap, easy to produce, and even easier to transport. It is often mixed into other drugs causing deadly overdoses in many cases.

We recently featured fentanyl overdose survivor and peer support specialist Calvin Brown on The Recovery and Company Podcast. Calvin was sober from drugs and alcohol for several years when a trip to the doctor changed everything. His addiction to opiates began like many others, with a prescription, further complicated by a surgery and cancer diagnosis.

“I went to the doctor and was getting these pain pills until one day I could not get a refill and my body was sick,” said Calvin. “I did some research and found out what it was and then I started going back to the streets. So, I am back doing what I used to do only now my new love is opiates. I thought I could just take them like they are supposed to be taken, but they took me.”

Calvin said when he was diagnosed with cancer it was even more of an excuse to continue the drugs. But when he went ‘back out on the streets,’ the drug climate had changed drastically.

Calvin’s story is not unique. Around 80 percent of individuals who use heroin started with prescription opioids (NIDA, 2015). The disturbing fact is that in most cases fentanyl has replaced heroin, unbeknownst to many buyers. 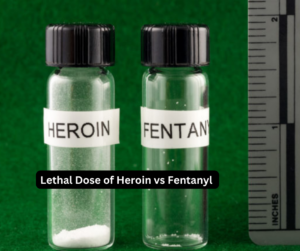 “What is scary is when I first started doing the heroin in 2008, they would just cut it a little bit,” says Calvin. “Now they are not doing any of that. People are thinking they are getting one thing and they are getting another. So, the place that I’m going to get the drugs while I’m battling cancer and everything, people are dropping like flies. They are dying, and the dope dealer is like “hey I got that stuff that just killed this dude, or just killed this person.” The insanity is I still wanted it. But it was too late, I did not voluntarily ask for the fentanyl.”

“I never really saw the drugs I was doing as dangerous,” says Cavin. “I always thought I could handle it. Fentanyl, I could not handle it, and they are putting it in everything.”

Another huge tragedy in the fentanyl crisis is the loss of young lives. So many adolescent kids (and sometimes younger) are experimenting with marijuana and pills. One mistake or one wrong pill is all it takes to end their life.

According to Calvin who lives in Louisiana, on Halloween one kid overdosed from fentanyl laced candy and another one died. He says that people think it’s a game or some kind of joke. “I’m just going to be the one to let them know it’s not a game,” says Calvin. 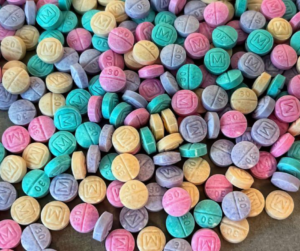 Rocky Herron who was with the DEA for thirty years and will be featured on upcoming fascinating episode of The Recovery and Company Podcast says it is sheer economics with these drug dealers. They realized colorful pills that look like candy sell better. He met one dealer who told him that “pink pills sell better.”

The DEA warns that these tragedies are being driven by fentanyl.

“Fentanyl is highly-addictive, found in all 50 states, and drug traffickers are increasingly mixing it with other illicit drugs—in powder and pill form—in an effort to drive addiction and attract repeat buyers. 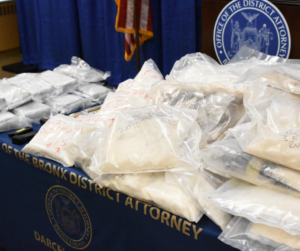 These mass-overdose events typically occur in one of the following recurring scenarios: when drug dealers sell their product as “cocaine,” when it actually contains fentanyl; or when drug dealers sell pills designed to appear nearly identical to legitimate prescriptions, but are actually fake prescription pills containing fentanyl. This is creating a frightening nationwide trend where many overdose victims are dying after unknowingly ingesting fentanyl (DEA, 2022).

It took an overdose that nearly killed Calvin to finally come to terms with just how dangerous fentanyl is. He was driving truck for a semi company at the time and reasoned he could do just a little bit of fentanyl. However, he recently got clean and his tolerance went down. Calvin woke up in another location across town. He had crashed the semi and was only revived after Narcan was administered by law enforcement.

It was that little bit of fentanyl that nearly took Calvin’s life.

For Calvin and others like him, getting clean meant getting honest with himself.

“I went through ups and down and in and out of different rehabs. Rehabs in California, rehabs in Virginia. You know I was just going from state to state trying to find a solution when all I really needed to do was surrender. I had to surrender my state of mind which was telling me that I can still do this drug. Because that one drug, that opiate, always led me back to other things. I had to get my butt whooped. That stubbornness had to come out of me. By the grace of God, He allowed me to make it through that.” 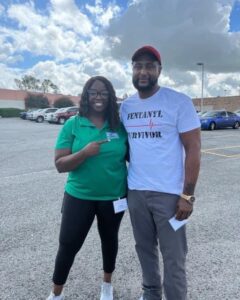 Calvin’s advice for anyone in recovery or still using is not to play around with drugs because one pill can lead you to fentanyl.

“If there is a natural way to help your pain than do some research on natural supplements. Use my story as a point of reference. I was the one that said this will never happen to me. I never thought I would be on fentanyl or heroin or any of these things, but when you try these drugs, they can take you further than you ever thought that you would go. Just do not play with fire. I hate pain but I have had so many opportunities to feel the inner pain and soul pain and it cannot compare to the physical pain. I would much rather have the physical pain than the internal pain because no medicine or substance can sooth that.”

At The Life Change Center, we help people overcome addiction to fentanyl and other opiates through medication-assisted treatment, counseling, family programs and peer recovery support. If you or a loved one is struggling with fentanyl addiction please reach out for help.

Jodie is passionate about addiction recovery. She is currently working toward her Addiction Counseling License. She spent 30 years in radio broadcasting and now hosts several podcasts and blogs about addiction/recovery.
Page load link